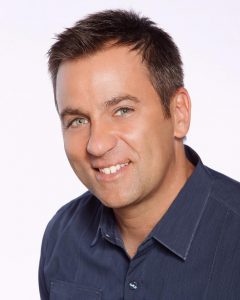 Energetic and accessible, acclaimed standup John Heffron shares an array of relatable experiences from childhood through life as a married father. He’s learned a thing or two about relationships with family, friends, and even himself along his journeys, gaining an astute, uniquely honest perspective widely praised among his comedy peers. Audiences of all ages relate to his enthusiastic, hard-won wisdom, recognizing how often the path to maturity is marked by universal triumphs and failures. Rather than mock differences, the Detroit native aims to engage, connect, and enlighten.

Along with appearances on The Tonight Show, The Late Late Show, HBO, FX, VH1, A&E, and CMT, Heffron remains one of a small handful of veteran performers to tape two separate Comedy Central specials and has an hour special, Middle Class Funny, on Netflix.

In the podcasting realm, Heffron has guested on WTF with Marc Maron, The Joe Rogan Experience, and Ari Shaffir’s Skeptic Tank. He launched his own The State I’m In on the All Things Comedy network in August 2014. Much like his self-effacing live material, Heffron’s podcast invites guests and listeners alike to explore the ever-fluctuating position they find themselves in both physically and mentally.

In addition to headlining clubs and appearing at festivals around the world, Heffron remains in high demand as a performer at events for numerous Fortune 50 companies including Mercedes, Frito Lay, Sonic, Johnson & Johnson, Ernst and Young, and the FBI, just to name a few.

His four albums, Middle Class Funny DVD, and best-selling advice book I Come to You From the Future: Everything You’ll Need to Know Before You Know It are available on iTunes and Amazon.

Access to this event requires a separate ticket from Northern Green and an additional fee as noted above.  Registration is now closed!